skip to main | skip to sidebar

Last one for August Inspiration Class. I cased this card from Tessa Wise. 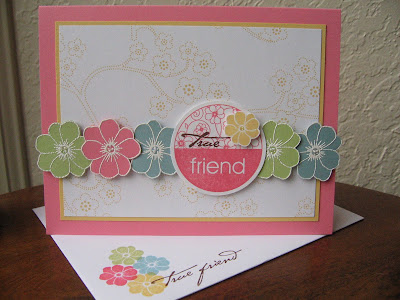 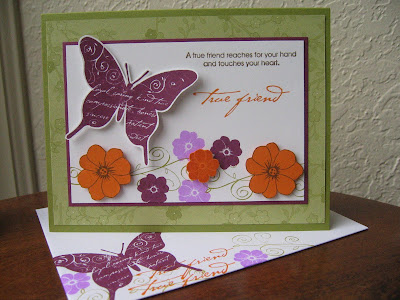 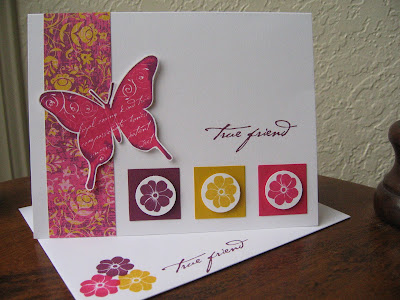 Card #3 for August Inspiration Class. I used the images from the Simple Friendship set to make my own designer paper. And I'm really loving these new colors. 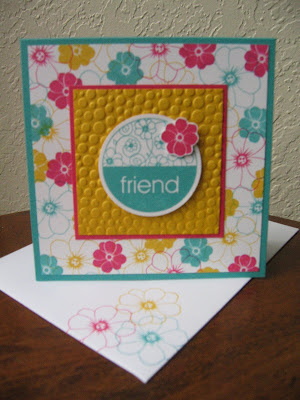 Another card from August Inspiration class. I don't htink you can see it very well, but the edges of the flower have glitter on them. 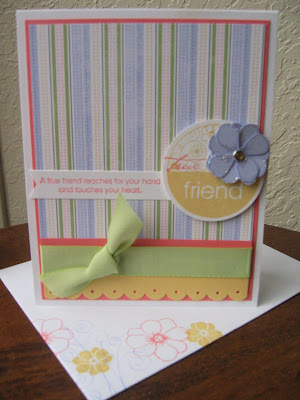 Here's the first card from August Inspiration Class. I CASEd this card from Tessa Wise. I love this Parisian Breeze DSP. Sure wish I had used it before it retired!!! 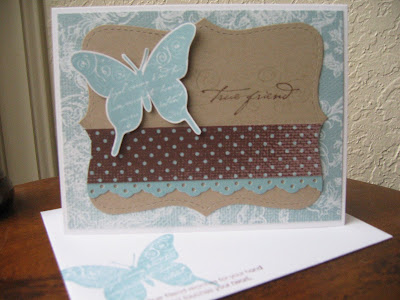 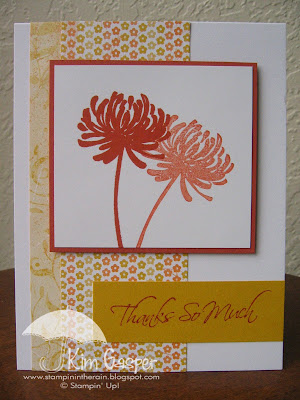 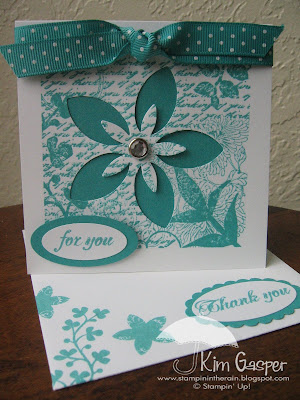 Well, I had one more card from the Retirement SAS, but the photo's gone missing, so I'm moving on to something else. Since new stamp clubs started in July, I made two sets of club cards. This little birdie card was cased from this card on Splitcoast. I was just getting around to using Pacific Point in June. Turns out I love the color, and now it's gone. 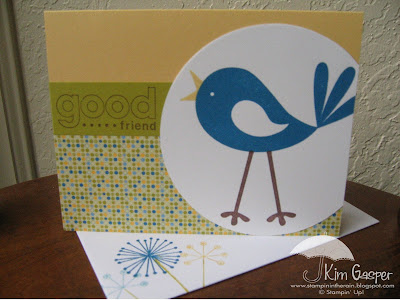 Here's another one of my favorites from the Retirement Party back in June. I love the Heartfelt Thanks stamp set! This card was inspired by this card by Renee Van Stralen. 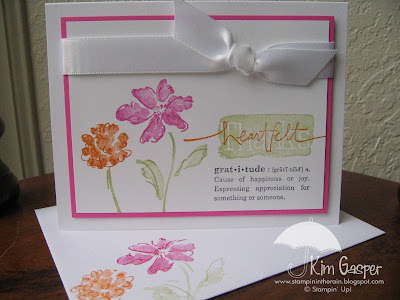 Labels: Define Your Life, Heartfelt Thanks 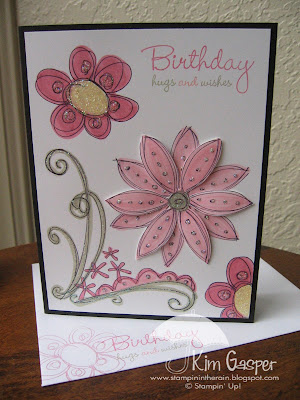 You know how you have certain people in your life that you just utterly enjoy being around? My dear friend and former teaching colleague, Zandria, is one of those people. She's fun, smart, witty, creative, talented, and to put it simply...FABulous! A few weeks back, she came for a visit and we spent the weekend designing and assembling custom invitations for her 40th birthday bash. Here's what we made: 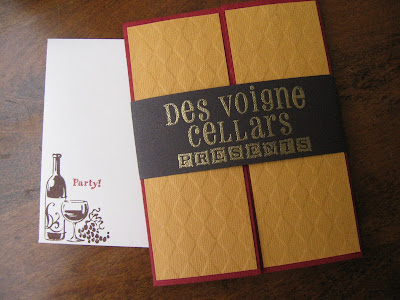 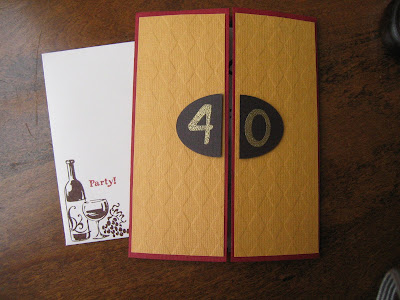 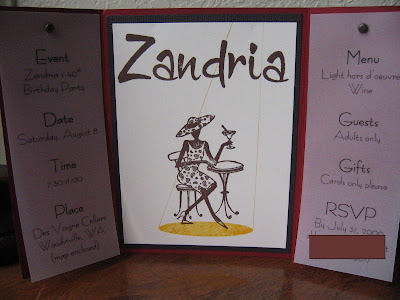 Happy Birthday, Zan!!! Sorry we can't be there for the big celebration, but we're looking forward to seeing you for a visit afterwards.
Posted by Kim Gasper at 12:20 AM No comments:

This was one of my favorites from the retirement class. I love beach images. This card uses the shells from Seaside. To make each shell, I stamped them with Sahara Sand onto soft colors. After cutting out the shells, they are arranged and popped up on dimensionals. The sand in the background was made with the splatter stamp from Itty Bitty Backgrounds. 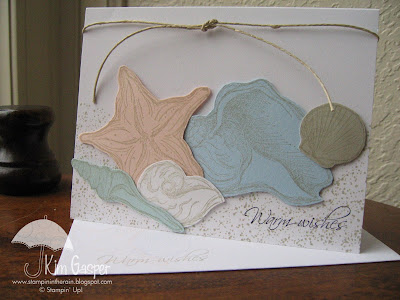 I think there was a sketch challenge of some sort with this layout because I saw several cards on Splitcoast with this layout when I was browsing through the Wild About You category. So, I took my turn to make a simliar card. This is a quick, simple, and cute card that you can whip up in no time when you need to. 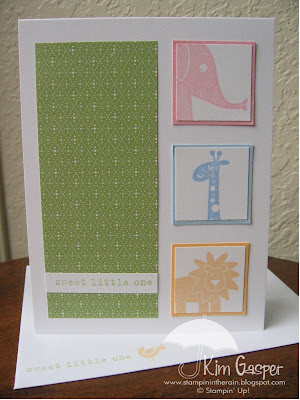 Labels: Holidays and Wishes, Wild About You

The first set we said goodbye to at the Retirement Party was Seeing Spots. This set is great for making your own patterned paper like I did in this card. 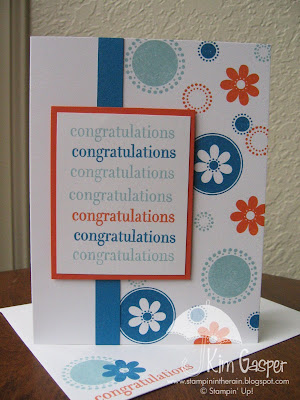 Oops! I thought I'd scheduled more posts automatically, but apparently Monday was the last one. Sorry about that.

This card didn't make the cut for my Retirement Stamp-a-Stack class back in June, but I thought I'd post it anyway. The cards that did make the cut are coming up in the next few days. 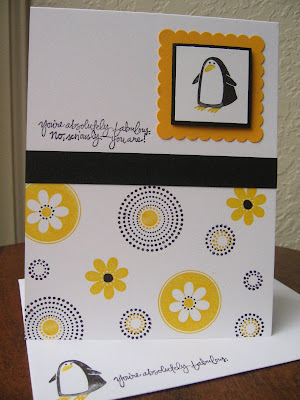 This was the third and final club card for June. Maybe you noticed that all of the stamp sets used for club cards this month were ones that were retiring from Stampin' Up'! We said goodbye to some more favorites at my Retirement Party Stamp-a-Stack at the end of last month. Those cards are coming up next. 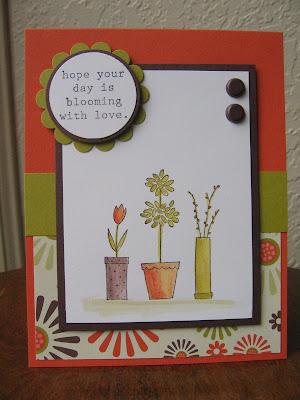 This one is a direct case of a card I saw on Julie Davison's blog. I love how the bright colors pop off of the kraft cardstock. Plus, it used the Pink Flamingo DSP, which is simply gorgeous! 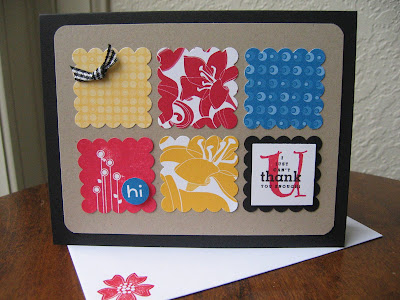 And here we are with another belated holiday. This was one of the cards we made for June Stamp Club. I cased this card on SCS moving things around just a bit. A stamp club member, Sharon, was very clever and thought of the idea to add these little rhinestones to the stars. I think it really adds to the card. So, I did what any respectable stamper would do. I copied her. 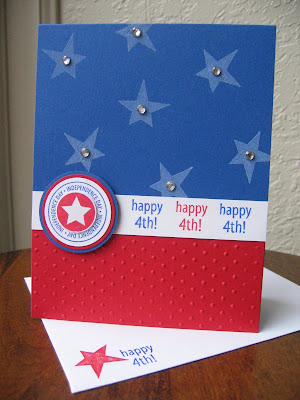 Hello, friends! It's been awhile since I've posted, and that's because I've been enjoying spending summer time with hubs and baby AND I've been stamping! Yesterday, I photographed and uploaded 20 cards/projects to be able to share with you.

To celebrate Keith's first Father's Day, I made him a card and a canvas. Here's the card. I really like how it turned out. Super simple and masculine. I realized that I NEVER make masculine cards...ever. My poor stampers. I'll have to make a point to at least make a few a year.

The BEST thing about this card (besides the fact that it signifies we are finally parents) is that it scored me a Big Byte (you know...the Crop-O-Dile's cousin). That's right. This is actually a $50 kind of card. I couldn't help it if my Crop-O-Dile just wouldn't reach in far enough to set those inner jumbo eyelets. And, of course, by then the whole card was finished except for those. So, it had to be done. 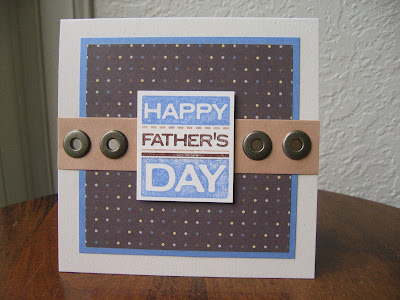 Confession...I did write on the inside before I photographed the card. Before I wrote on it, this IS what it looked like, but I had to cheat and make a temporary inside so I could take the picture without the writing. 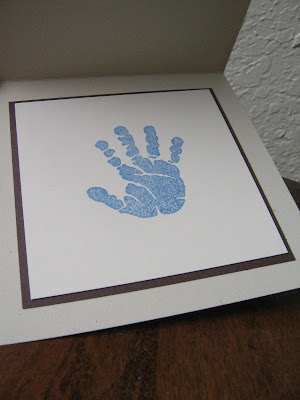 Now I also made him a super simple canvas using a photo of Kate from when she was only 11 days old. I just love the way she's looking up at him. All I did to make the canvas was paint it cream colored and slap on the photo and these pre-made vinyl words. I was not up for being very creative with this project. 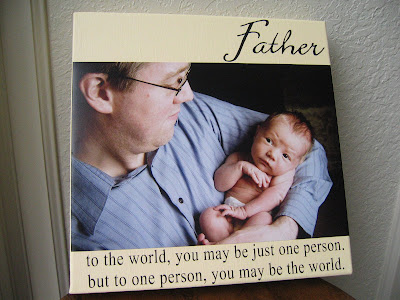 Have a great day, and thanks for stopping by!
Posted by Kim Gasper at 10:53 AM No comments:

I {Heart} Your Blog 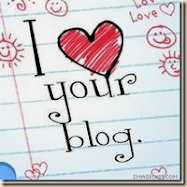